Reverend Ben Roy Lillie, Sr., is a leader, a profound preacher and teacher, a man who has led many to Christ. He is considered one of Houston’s “Legends in Preaching” and has been preaching/pastoring for more than 40 years. 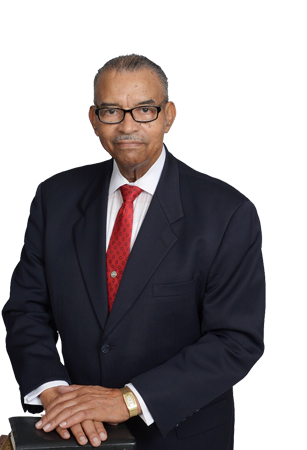 Pastor Lillie was a sought after revivalist and has preached all over the United States. In 1979, he visited the Holy Lands and frequently shares that experience with believers. His all-time passion and number one priority is winning the lost to Jesus Christ. He has taught those who serve in our ministries that being a witness is our first duty to the work of the church.

The ministry of Greater True Faith has been a huge blessing to the people of God from the many lessons and sermons of Pastor Lillie. God has demonstrated his grace time and time again and for that we are grateful! The members are truly people with Greater True Faith.

We believe in God

We believe there is only one true and living God. He is immutable, omniscient and omnipresent. He is the Creator of all. He is God the Father, God the Son, and God the Holy Spirit.

We believe in Jesus Christ

We believe that Jesus is Savior, the son of God and the expressed image of his personality. He died on the cross for the redemption of God’s people. He rose one morning to confirm to the world that God is still in control of Heaven and Earth.

We believe in the Holy Spirit

We believe the Holy Spirit was sent to Christians to comfort them in Christian living. The Holy Spirit is the third person in the God Head. It empowers the believer; convicts of sin; points us to truth and leads us into righteousness.

We believe in the Church

We believe in the church; the church is the body of Christ, the bride of Christ and a fellowship of regenerated men and women called out to live for Christ.

We believe in the Holy Scriptures

We believe that the scripture is the Holy Word of God. It is his written authority for the Church. It was given by divine inspiration to ordinary men. The scripture is truth.

We believe in Creation

We believe man was created in the image of God; God breathed his life into man and man became a living soul.

We believe in the Fall of Man

We believe man fell from grace to a state of sinfulness, thereby experiencing separation from God. Because of one man’s sin (Adam), consequently, all men are sinners. By accepting Jesus Christ as one’s Saviour, man is redeemed.

We believe in Salvation

We believe in God’s saving grace; that the blessings of salvation are free and eternal to all through the Gospel.

We believe in Justification

We believe that we are justified by our faith in Jesus Christ. Our expression of faith brings us into a right relationship with God.

We believe in the Lord’s Supper and Baptism

We believe baptism is an outward demonstration of God’s inward renewal in the life of the believer; in baptism our names are changed. We baptize in the name of the Father, the Son, and the Holy Spirit as described in scripture. Baptism is a prerequisite to the privilege of the Lord’s Supper. Jesus Christ took bread and wine established them as the imperishable symbols of the church.

We believe in the Virgin Birth

We believe in the Virgin Birth. Mary, the mother of Jesus conceived him by the Holy Spirit as no other man in the past or in the present can ever be born. He is both the Son of God and God the Son.

Greater True Faith ministers to the spiritual, physical and financial needs of its members and neighbors. We hold religious meetings weekly to address the spiritual development of people of all ages. The primary focus of the ministry is education and empowerment both spiritually and academically.

The Men’s Ministry, Women’s Ministry and Youth Ministry individually and collectively administer programs that target the physical needs of people in the church and as a form of outreach to the community.

The church celebrates the contributions of seniors in our ministry and community. They provide food, clothes and shelter to those in need. They respond to individuals impacted by natural disasters.

The Outreach Ministry is vital to the growth of the church and the enrichment of lives in the community.

How We Do It

The operation of the church and its ministries is supported by the commitment of volunteers who give their time and skills; the individual contributions of tithes and offerings from its members and donations from friends and businesses.

In March of 1962 there was a group of believers in Christ summoned together for the purpose of organizing a church at Anita & Burkett in Houston, Texas, with Rev. W.W. Dudley and the late Rev. L.H. Simpson in charge of organizing services. The name selected was Greater True Faith Missionary Baptist Church. The purpose of this church was to hold religious meetings, to teach and instruct its members in christian living, to worship God publicly and to do all business necessary and pertinent for the operation of a church. After being organized, the church needed a pastor. The pastors that served were Rev. Gene Norman (1962-1966) and Rev. E. P. Dalco (1966-1975). Our pastor, Rev. Ben Roy Lillie, Sr. has diligently served this community and membership since June 22, 1975.

Since Pastor Lillie began pastoring, the ministry has grown exponentially. There are currently three associate ministers, five trustees, 33 officers, one church clerk and nine ministries. From July 1975, a host of people have come to rededicate their life, restore their membership, request prayer, join by christian experience or come as a candidate for baptism.

God has blessed our efforts spiritually, numerically and financially. In the years of leadership under Pastor Lillie, God has allowed us to purchase 11 lots, completely cleared and paid for. A ground breaking celebration was held on October 14, 1990. From 1990 to 2012 progress was made on completing the edifice.

Greater True Faith experienced years of test and trial from 2010-2012. Pastor Lillie fought hard as a mighty warrior for Greater True Faith, but God said “not so.” We vacated that property in July 2012.

Greater True Faith continued to trust God and remained focused following our Pastor. In July of 2012, Christian Hope MBC graciously opened their doors for us to continue our worship services at 8am on Sunday mornings. Greater True Faith marked the 50th Anniversary in 2012. This landmark occasion was celebrated and documented with the 75:50 Celebration.

Since moving, GTF immediately began creating partnerships in the northwest Corridor. Holbrook Elementary School was adopted and Greater True Faith has been recognized as a Strategic Community Partner with Holbrook Elementary School. We are engaged in the community and annually volunteer at Mayor Sylvester Turner’s Fun Day in the Park. We support youth activities in the community including youth baseball, dance, career days, and festivals.

Bodies are being Healed and God’s work is being Done

Up Until now, the Lord has been and is good!

Beloved, now are we the sons of God, and it doth not yet appear what we shall be: but we know that, when he shall appear, we shall be like him; for we shall see him as he is. I John 3:2

History continues to be written as we Experience Greater!